Well, this happened. Jeff Bezos, founder and CEO of Amazon, became the wealthiest person on the planet.

Following a massive run on Amazon’s stock price, Bezos surpassed long-running holder of the title for the richest man on the world, and fellow tech titan, Bill Gates.

Jeff Bezos has not only disrupted several industries, he has also disrupted the very way of doing business.

Back in the old days, i.e. around 20 years ago, the common approach would be that an upstart business would get into an industry, spend a few years (usually 2-3) running on a loss, and then, after hopefully capturing some market share it would start generating profits.

Those profits would be either retained in the business or partially re-invested into it, but a good chunk of them would be distributed to the shareholders to make them happy.

Bezos has discarded the old paradigm in favor of reinvesting all cashflow surplus into the business and sharing part of it with Amazon’s customers who enjoy continuously lowered prices.

This approach has allowed Amazon to dominate the e-commerce scene in the United States and to disrupt complete industries (like traditional bookstores), while kick-starting entirely new ones (like digital publishing).

Over the years, Bezos has shared his wisdom on doing business and achieving success via interviews or shareholder’s letters.

In this article, I have collected a few quotes that highlight his way of thinking. Hopefully, we will be able to extract useful insights that will help us to build our businesses in a similar way.

1) “Your margin is my opportunity.”

Assessing the competition, Bezos scoffs at the idea of focusing on margins and maintaining them so that you generate profits. Instead, as I mentioned above, he uses whatever profit surplus exists to further reduce prices and to invest deeply in the business.

On top of that, he does not dwell on the traditional “earnings metrics” that can be easily skewed. He focuses on absolute dollar free cash flow; that is what matters on the long term.

Now, don’t misunderstand. This does not mean that he disregards the financial numbers that reveal the health of a company. It means that he is willing to forego profits in the short-term so that he is able to generate massive positive cashflow in the long-term.

Staying on the subject, Bezos has strategically decided that Amazon is going to be a company that strives to lower prices for its customers, instead of raising them (Hello Apple!).

This is possible by slashing profit margins as we saw above and by investing in the technology and infrastructure that will allow the company to do more with less in the future.

Adopting such a pricing strategy, Amazon products become appealing to a wider customer base, thus making the website more reachable to the masses.

3) “If you double the number of experiments you do per year you’re going to double your inventiveness.”

Amazon is a passionately innovating company. With Bezos on the helm, the e-commerce giant is willing to make bold bets and run world-changing experiments.

These experiments are not always successful, of course. For example, the Amazon Fire mobile phone was a massive flop.

From time to time though, a big bet will pay off, just as happened with Amazon Web Services, which is now an enormous profit center for Amazon.

4) “You have to be willing to be misunderstood if you’re going to innovate.”

Building on the previous point, if you are willing to innovate, experiment and make audacious bets, it is certain that most people will not understand your goals and might even mock you.

Sometimes, in order to win big, you need to ditch the consensus view and adopt a more contrarian strategy. You need to go where other people won’t dare to go.

Something like this requires great courage and a very long-term perspective, attributes that Jeff Bezos definitely possesses.

5) “If you don’t understand the details of your business you are going to fail.”

A phrase that sounds super obvious, yet most aspiring entrepreneurs and business people seem to forget.

This is something that I have written multiple times about: You need to know and understand every little detail of your business, from how your revenue model works to what your financial numbers are.

It is impossible to build a scalable, thriving business without a deep understanding of its mechanics and internal mechanisms.

6) “Frugality drives innovation, just like other constraints do. One of the only ways to get out of a tight box is to invent your way out.”

With this quote, Bezos stresses the importance of frugality and resourcefulness as drivers of innovation.

By having limited resources and being frugal, humans, whether in modern business or in ancient desert, are forced to become more creative and more resourceful. The constraints make them think harder and come up with more imaginative solutions.

Sure, in some occasions, having more capital will allow you to execute faster and more ferociously. However, more money is not always the solution to your problem.

This has become apparent in modern times where startups go on to raise unbelievable amounts of money while losing their resourcefulness and ultimately failing to deliver a valuable solution to the marketplace.

7) “The most important single thing is to focus obsessively on the customer. Our goal is to be earth’s most customer-centric company.”

I think it is painfully obvious by now that Amazon is obsessively customer-focused and they will go to great lengths to provide the best experience for their customers while keeping the prices down.

This approach allows the company to build a massive, loyal base of customers who will return to Amazon’s online store again and again, while building trust and equity that Amazon can leverage for years to come.

8) “My own view is that every company requires a long-term view.”

Not much to say. Jeff Bezos and Amazon have adopted a long-term view disregarding short-term solutions in order to invest for the future.

Well, based on their stock price performance over the past twenty-plus years, it seems to be working. 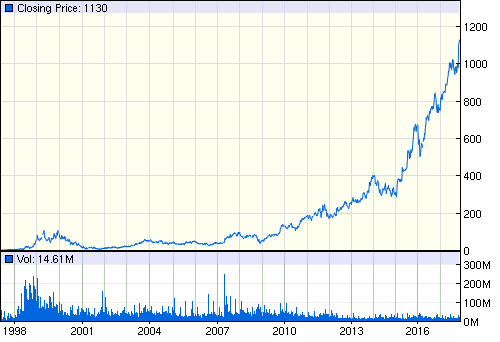 Jeff Bezos is an amazing businessman and visionary entrepreneur that has changed the world and disrupted the way businesses operate.

In this article, I provided some of the quotes he has shared with us over the years and discussed some of the insights that those hide.

By focusing on customers, be willing to experiment and adopting a long-term view, Amazon has become a massive force in the marketplace and is on each way to become the first trillion dollar company.

Perhaps, by embracing these principles, we can create a great company of our own. Let’s do it!