A few days ago, extraordinary entrepreneur Garrett Camp, co-founder of both StumbleUpon and Uber, shared the first pitch deck the Uber team had created in late 2008.

In case you somehow missed it, Uber (originally called ‘UberCab’) is an on-demand car service available via a mobile application. It has expanded aggressively all over the world during the past few years, most of the time under the helm of CEO Travis Kalanick (who was recently forced to resign).

Lately, the company has been battered with a wave of bad news and lawsuits for controversial actions ranging from sexual harassment allegations to illegal price fixing.

Truthfully, most of these lawsuits probably have some merit, but don’t forget that litigation is America’s favorite sport, and when we are talking about such a rich company, everyone wants to have a piece of the pie.

Despite all these troubles, Uber remains the most valuable private “startup”, valued at over $60 Billion. The term “startup” is an understatement, since Uber pulled $6.5B in revenue in 2016, while doubling its gross bookings to $20B.

Since Uber has reached a behemoth size, it is that more important to examine the initial pitch deck and witness the humble beginnings of the company.

Additionally, the fact that Uber has reached its enormous size in less than a decade demonstrates how quickly and furiously businesses are able to scale in this modern world.

So, let’s dive into the presentation and see what we can learn!

1) Uber identified a painful inefficiency in the market

As I have mentioned many times, when you contemplate launching a business, you need to address a particular inefficiency or solve a problem. This is exactly what Uber did by identifying the ridiculous inefficiency of the traditional taxi system.

Cabs were using old and inefficient technology, you had to hail them by hand (or phone) and, most importantly, their quality of service was pathetic.

Uber then introduced a service that was orders of magnitude better and of course decimated the competition. Consider that taxi medallions have lost almost 80% of their value within a few years.

2) The business evolved a lot over time

Initially, Uber was targeting the more high-end market by offering a “members only” service and by using luxury cars. 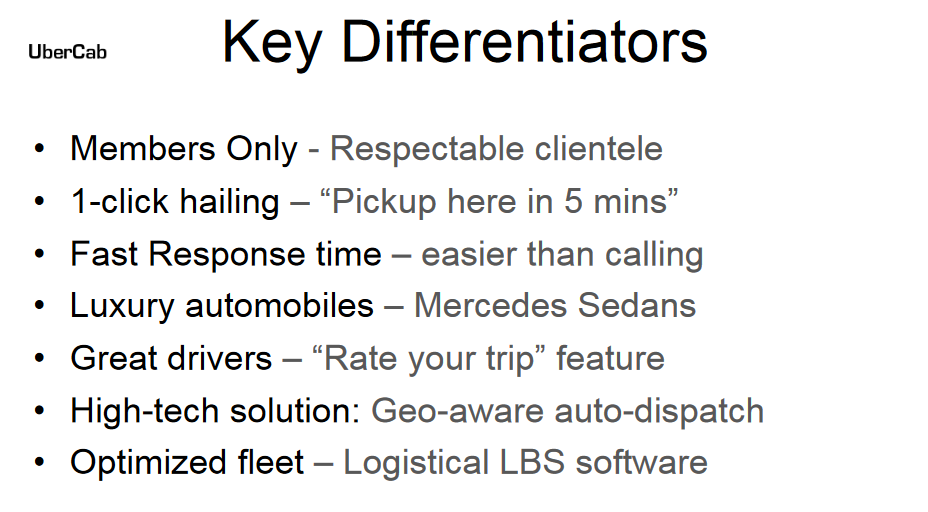 However, they quickly realized that their real customers were normal people who wanted to move efficiently around town but previously couldn’t do so because of the bad taxi service. They were able to serve and capture that market fueling their growth thereafter.

3) The service offered convenience and efficiency

The service was centered around convenience. With one click in the app, you could have a clean, luxury car waiting for you to take you to your destination. You did not have to hail taxis in the street nor put up with obnoxious drivers. 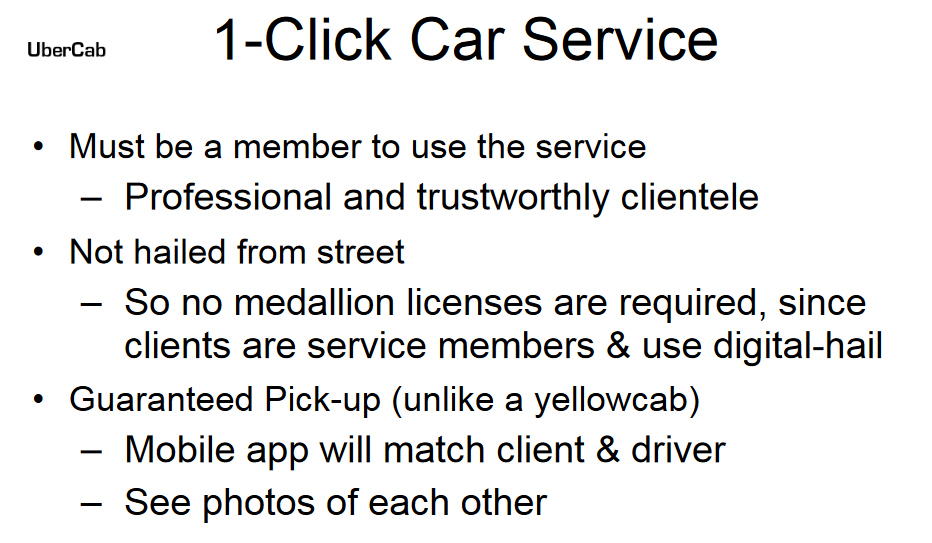 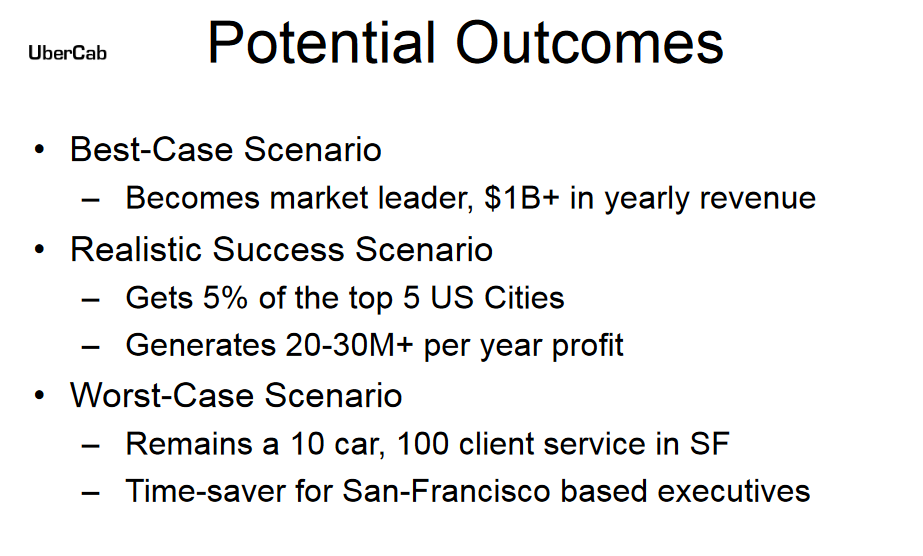 Talk about a humble beginning. The truth is that it was impossible to calculate the size of the market because Uber actually created a whole new market. As I said, Uber was able to offer a convenient, affordable service to people that did not imagine doing so.

5) Uber started in a small market and expanded from there

Uber did not start out to dominate the world from day one. Initially, they launched the service only in San Francisco and New York City, keeping their focus on delivering a great service in those two areas. 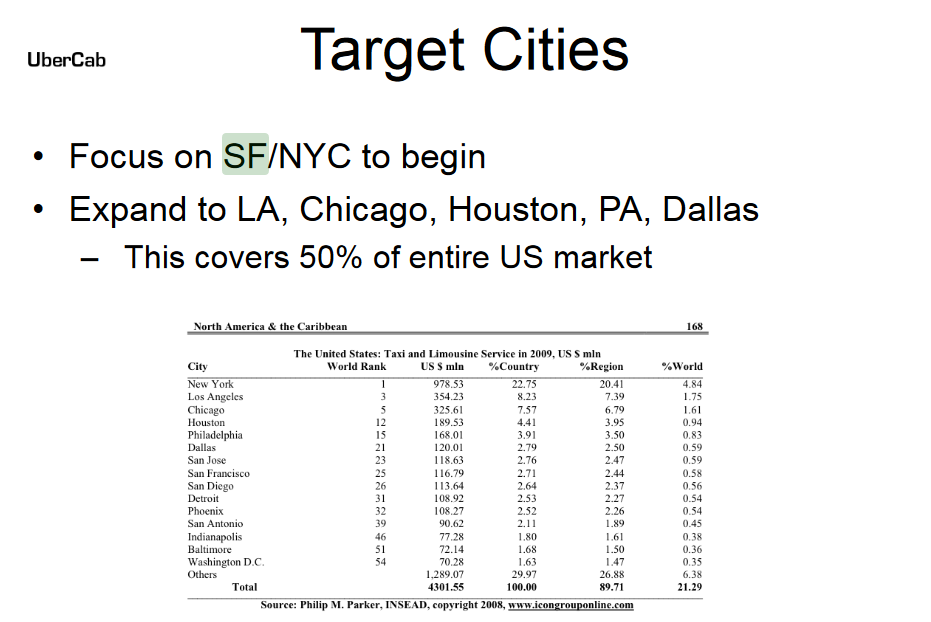 Also, note that the selection of the cities was impeccable. Both are very crowded and have lots of affluent citizens.

The Uber idea and app were very early to market. Don’t forget that, when Uber launched, the iPhone was in its very early days and had not taken over the world yet.

Serendipitously, the Uber expansion coincided with iPhone’s domination in the mobile world and with the overall boom in mobile apps that iPhone kick-started. 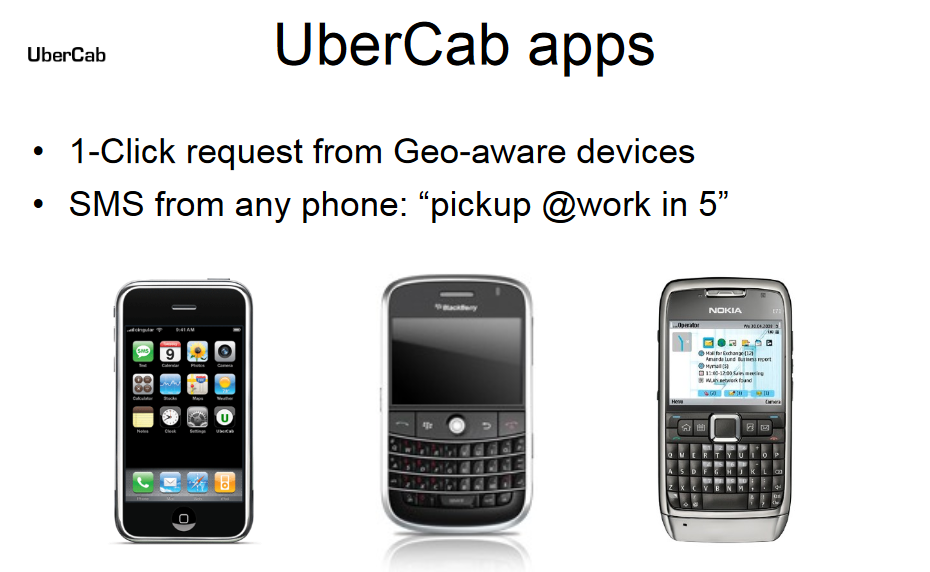 As you will notice in the presentation, the app was targeting the Blackberry and Symbian operating systems! The Android platform did not even exist!

7) The beginning was very humble

It seems almost surreal that Uber started with such humble beginnings. The founders underestimated the market, they had not developed a spectacular technological solution yet, and the whole venture appeared a bit crude.

It is almost funny that the team had even listed the creation of the Paypal account in the progress report! 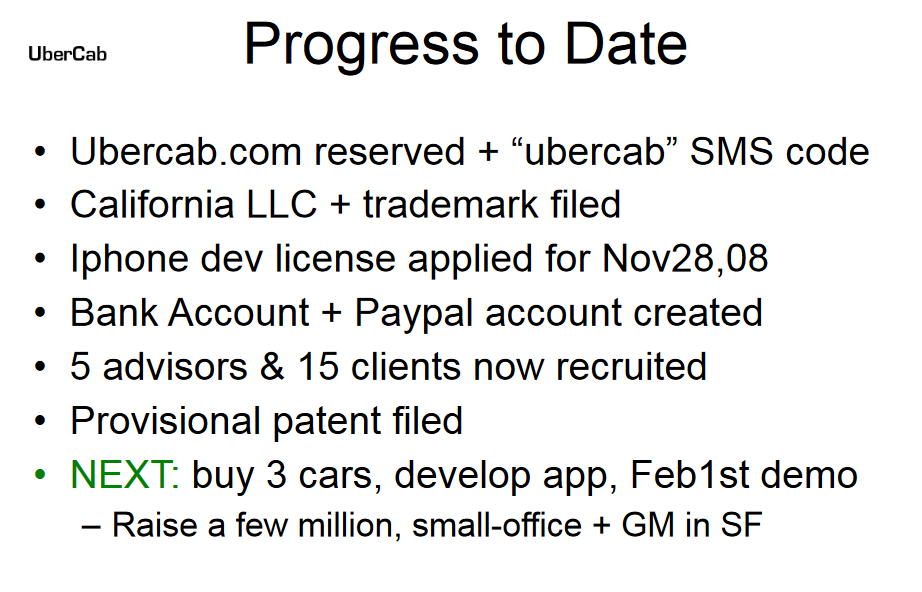 This comes to show us that every long journey starts with a few small steps.

The story of Uber is a phenomenal growth story and a startup case study that I urge you to read and learn about.

It started from a great idea attacking an inefficiency and grew by a relentless execution from the Uber team.