There is always so much to learn when you listen to a successful entrepreneur talk about his journey and his ventures.

I recently had the chance to attend a presentation made by Lefteris Ntouanoglou, CEO and founder of Schoox, an online Learning Management System (LMS) with customers all over the world, including US based fast food giant Subway.

Lefteris was presenting at a local “entrepreneurship event” and he was discussing how a small, unknown startup can grow to hundreds of thousands of users and land big names like Subway.

Fortunately, I was lucky to be there for Lefteris’ presentation because he delivered a great one, sharing his insights and lessons from his entrepreneurial journey and giving the pulse of what being an entrepreneur and business owner is all about.

Here are some key takeaways from his presentation and speech:

1) If you want to really scale, you got to be in the US market

The name of the game for every startup is scale. Being unable to scale things, or at least present a solid plan about how scale is going to be achieved, is a “kiss of death” for every newly launched company that seeks to gain traction.

This fact has many corollaries. One of them is that if you want to build a truly scalable business, you have to address the US market.

Lefteris was talking about how they initially contemplated launching their product in Europe first, but they scratched that idea because of Europe’s fragmentation. There are indeed some big markets in Europe (like Germany or France), but the difference in culture, language and local laws would make scale an uphill battle.

In contrast, the US market is much more uniform and larger than any country in Europe. As a comparison, note that the US has a population of around 319 millions and an economy with GDP of about 18,000 Billion dollars, which is equal to the economic output of the whole European Union (EU)! In short, the US market is inconceivably enormous.

Of course, simply launching your product in the US market and actually capturing a significant market share are two totally different things. It is going to take huge amounts of effort to achieve something like that, but the size of the market is one that justifies that effort. 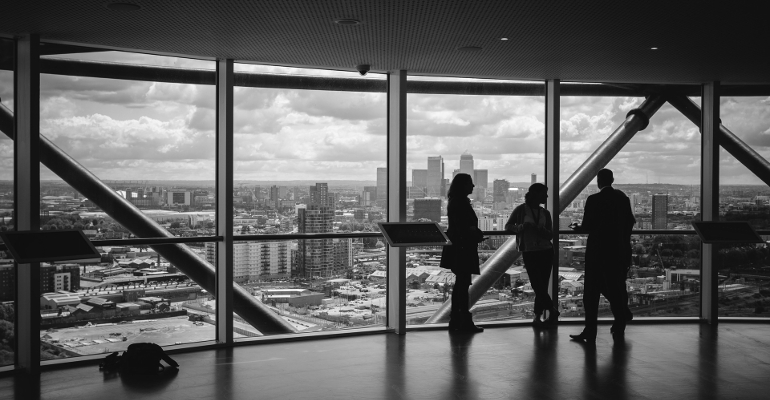 2) The real game starts after getting funded

Lefteris mentioned that his team was looking for investors in the US since they were running out of cash. With a lot of persistence and perseverance, they managed to get funded by an Angel investor with quite favorable terms. As he characteristically said, that is when the real game started.

A common misconception is that getting funded is an end in itself. Well it is not. It is an indication that somebody believes that your business is going to be successful and is willing to provide some of his resources to make that happen.

Getting funded is just a stepping stone towards the end goal. The end goal of a startup is to create wealth and make everyone rich and happy (founders, investors, customers and employees).

Additionally, when someone invests in a company, he does not do it for the fun of it. He is seeking a solid economic return on his investment. That means that he has expectations and that he might apply pressure in order to get that return. He might influence strategic decisions and even come in conflict with the founders.

This is one of the reasons that many entrepreneurs prefer to bootstrap their own companies and avoid seeking outside capital.

This is also the reason that some founders who accepted outside investment and even took their companies public, later on bought them back and made them private again.

The most notable examples are Richard Branson who took Virgin private after floating it to the UK stock market, and Michael Dell who recently took Dell private again.

When someone gets a piece of your company, everything changes.

Having said that, outside capital is useful in a lot of cases and can act as the catalyst that makes a company really scale, achieving hundreds of millions in revenue or more.

Lefteris’ company, Schoox, is in the Enterprise Software world. The customers of their LMS product are other companies that need a platform to help them provide training to their employees.

When Schoox knocked Subway’s door, it was just a newly founded startup, and Subway was already a behemoth. To give you a hint of their size, note that Subway is currently the largest single-brand restaurant chain and the largest restaurant operator in the world, operating more than 44,000 restaurants in 111 countries.

Choosing a small startup with no proven track record as a vendor, is a big bet for a company, especially for one like Subway with its humongous infrastructural needs. Additionally, large corporations are usually very hesitant to make bold moves.

For all these reasons, a startup that seeks to land grand names needs to address these issues and help them mitigate the risk they are going to take. Even more effort and caution will be needed when clients of that caliber are to be approached. 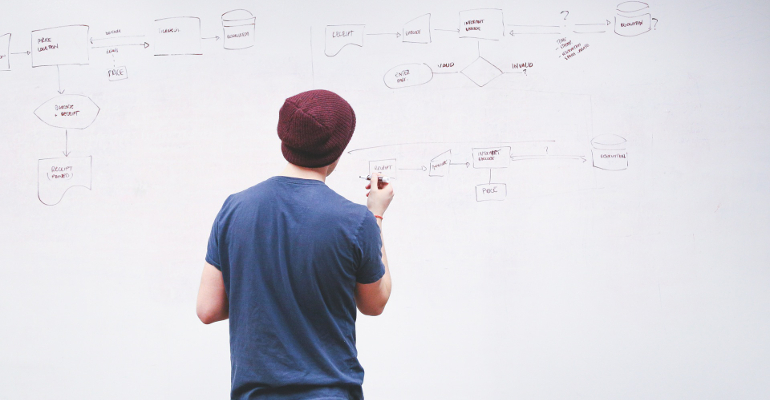 This one is huge. You got to go big, else don’t go at all.

You have to be prepared to “go all in” with this. There is no other way.

Entrepreneurship is an arduous journey. It it not for the faint-hearted.

As an example, Lefteris recounted that he and his team attempted multiple times to break into the US market before they finally cracked the code. They were constantly rejected or ignored, but they continued to push and hustle. They were not willing to give up unless all options were exhausted.

As he characteristically said, “you are going to ‘bleed’ during the journey”, so you have to be prepared for it. Their persistence eventually paid off, and they managed to get funded and subsequently launch and grow a great company.

Examples like this are countless. From popular entrepreneurs like Elon Musk who ran out of cash when starting Tesla Motors, to anonymous business owners who poured their money and “sweat equity” into their ventures.

The bottom line is that entrepreneurship can be a painful endeavor, so unless you are willing to endure it, you better stay in the sidelines.

5) You should raise as much money as needed

This brings us back to the issue of funding again. Lefteris argues that, when seeking outside capital, you should raise the amount of money that will allow you to reach your next milestone, not more than that, not less than that.

This is obviously a topic difficult to tackle and one that a lot of venture capitalists have tried to address over the years.

If you raise too little money, there is the danger of running out of cash and consequently be forced to close shop. This will depend on the rate that you are “burning cash” and the revenue growth your business is presenting.

On the other hand, if you raise too much money, you might suffer from dilution of ownership and make less in case of a business exit. Additionally, you will need to make serious progress for the next round to be an up round.

A popular opinion is that you need to raise the amount of money that will give you 12-24 months of runway. It gives you enough time to justify a valuation increase in the next round, make a lot of mistakes, and explore some radically different approaches.

There are also other factors in play. Is the business pre- or post- initial product/market fit. What is the state of the financing environment? Are investors more “exuberant” to invest?

It is useful to keep an eye on various VC blogs in order to be aware of the current market status. Here are some suggestions:

6) Find partners that will provide synergies

As we mentioned above, Schoox started as a small startup trying to get into a tough B2B market. This is a difficult situation to be in, since it is almost impossible to gain the trust of already established companies which will avoid betting on an unproven player.

One approach to work around this is to create synergies with other companies, preferably older ones, that provide complementary products and services. With this setup, the more established company will do the “selling” of your product, offering some of their credibility and making it easier for the customer to purchase.

This of course requires that you have a great product that others will be willing to bundle with their own. Additionally, you will have to create a win-win scenario where both companies will benefit by this partnership.

It all comes down to building a solid product or service and leveraging your network to help with its distribution. This sounds like Business 101! 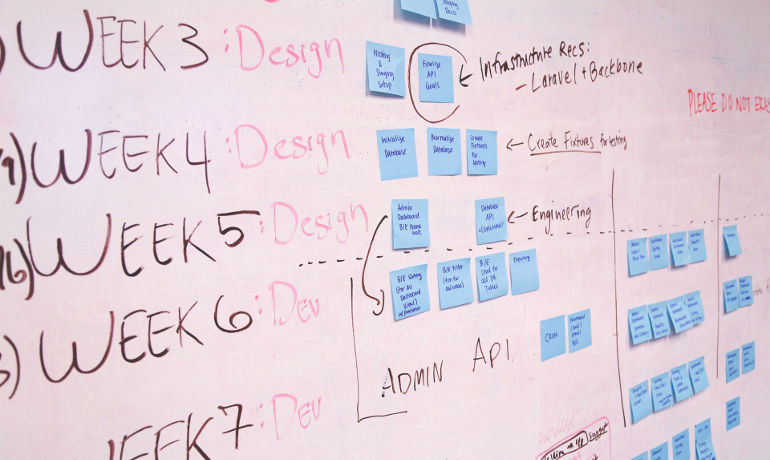 7) The product will change over time

Lefteris discussed that the current version of their product looks nothing like the original one they had developed. This is because they have kept improving it and fine-tuning it, listening to the market’s feedback.

As I have mentioned before, everything changes. You can’t afford to remain static, otherwise you risk becoming obsolete. Stagnation is not an option.

You have to be in a constant mode of iteration, always improving your product, always enhancing your value proposition and always revamping your business.

On top of that, you might also need to “pivot” at some point, when you find that you are not addressing a market problem and an alternative approach might be more appropriate.

For all these reasons, your product and your business will change over time, perhaps significantly. This is not to be avoided and prevented, but rather to be embraced and welcomed.

Another big one. Ideas are “cheap”, execution is what matters.

As Lefteris mentioned, if 10 different teams start a business based on the same “idea”, then after a few years there will be 10 different business with different levels of success, depending on their quality of execution.

Keep in mind that most successful businesses of our era did not start with a revolutionary idea. In contrast, they adopted an existing idea or concept, and did it massively better focusing on a flawless execution. Remember, Google was not the first search engine and Facebook was not the first social media network.

Yet people dwell on the topic of the “idea” and how important it is to have an “idea” in order to start a business. Guess what, it’s not.

Instead of trying to find the new revolutionary idea that will change the world, you should seek markets where the current players do not do a good job and where the customers are underserved.

You can then come in with your upgraded value proposition, based on your hard work and knowledge, and capture market share.

This is what companies have been doing again and again. The number of those that provide something radically different is quite low actually.

“Ideas are commodity. Execution of them is not.”

It is great to listen to successful entrepreneurs talk about their business and how they came to be. They always provide helpful insights and nuggets of wisdom, perhaps some inspiration and motivation too.

Here are again some lessons from the presentation:

1) If you want to really scale, you got to be in the US market
2) The real game starts after getting funded
3) Betting on a startup vendor is a risk for an established company
4) Go big or don’t go
5) You should raise as much money as needed
6) Find partners that will provide synergies
7) The product will change over time
8) Ideas don’t matter, execution is king

Keep them in mind if you are planning to launch a new business or while working on your new venture.